Things to Do Around Whitefish Bay: Safe outdoor activities during the pandemic

The pandemic lock-down has been going on for more than 3 months and while some things are opening up, life is far from normal. And, for those of us older than a ‘certain age,’ even when places have opened, an abundance of caution is likely to keep us from returning to normal pursuits.

Many habits have changed. Whole families are now often observed walking through the Village and bicycling city streets. Walkers and joggers are seen frequently in all neighborhoods. Kids are playing among themselves in neighborhoods throughout the Village, as some of the more-managed summer sports pursuits and camps have shut down.

As this ‘safer at home and OK outdoors’ environment continues, however, it can be helpful to find new routines. Walking or otherwise traveling through the same routes is getting more than a bit boring. Therefore, this missive offers some recreational ideas that you might not have considered—things that you can do safely in Whitefish Bay and which might prove to be fun ways to enjoy the outdoors.

Of course, even though most of these pursuits are outdoor activities, a measure of social distancing is still in order if you encounter folks that are not within your safe ‘social circles.’

1. Travel along the Milwaukee River using the Sauk Indian Trail

Did you know that the Sauk Indian Trail passed through what is now Estabrook Park? OK, our first suggested activity isn’t typically within Whitefish Bay, even though the Village does extend into the park a bit (more on that later).

Maps typically show the Sauk Trail as near the roadway through Estabrook Park. However, in reality it is more likely that the trail actually traversed the area using the east bank of the Milwaukee river. Fortunately, there is a nice hiking trail that extends along the bank of the river. It’s scenic, somewhat remote (you will almost forget that you are walking through an urban area), and passes adjacent to some very interesting things, including a noisy waterfall.

The trail can be assessed from several points, but perhaps the best location to start from is at the intersection of Hampton and Port Washington Roads. At the southeast corner of the intersection is this stepping off point, leading down to the river bank. As the sign states, there are trip hazards pretty much all along the trail. That is part of the fun of traversing a natural trail—but watch your step. (It can also be a bit muddy following a recent rainfall.)

The trip is a bit over 1.7 miles. However, because the route you will be traversing isn’t level and meanders a bit, and since you may wish to sightsee along the way, it will likely take an hour. Assuming you will be returning to your starting point, plan for two hours.

While that ‘no. 1’ sign might cause you to think that the trail is well marked, you’ll be hard pressed to locate the next sign. In spite of that, it is relatively easy to follow the trail—just keep the river to your right and follow the path.

You’ll hear the waterfall area well before you reach it. This can be a good place to take a break by walking the stairs to the Estabrook Beer Garden.

Look at the limestone as you pass through this area. Some of it possesses an unusual composition—a composition that makes it cementacious. In the days before the Portland Cement process was developed, this deposit of limestone was valuable and led to the development of several cement works that employed some of the early settlers from Whitefish Bay. 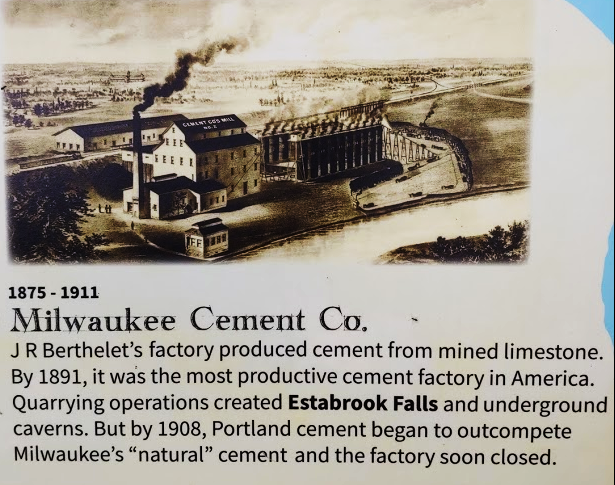 While you won’t likely come across this sign, since it is located up on the hill above the trail, it explains the significance of the area limestone, and the earliest of the cement factories.

Wisconsin archeologist Walter G. Bubbert published an interest map of the Estabrook Park area in 1944 in the Milwaukee Turner magazine. It is a bit whimsical, but provides a fair amount of detail about the area that you are traversing, and points out some of the things you might wish to investigate during your walk. 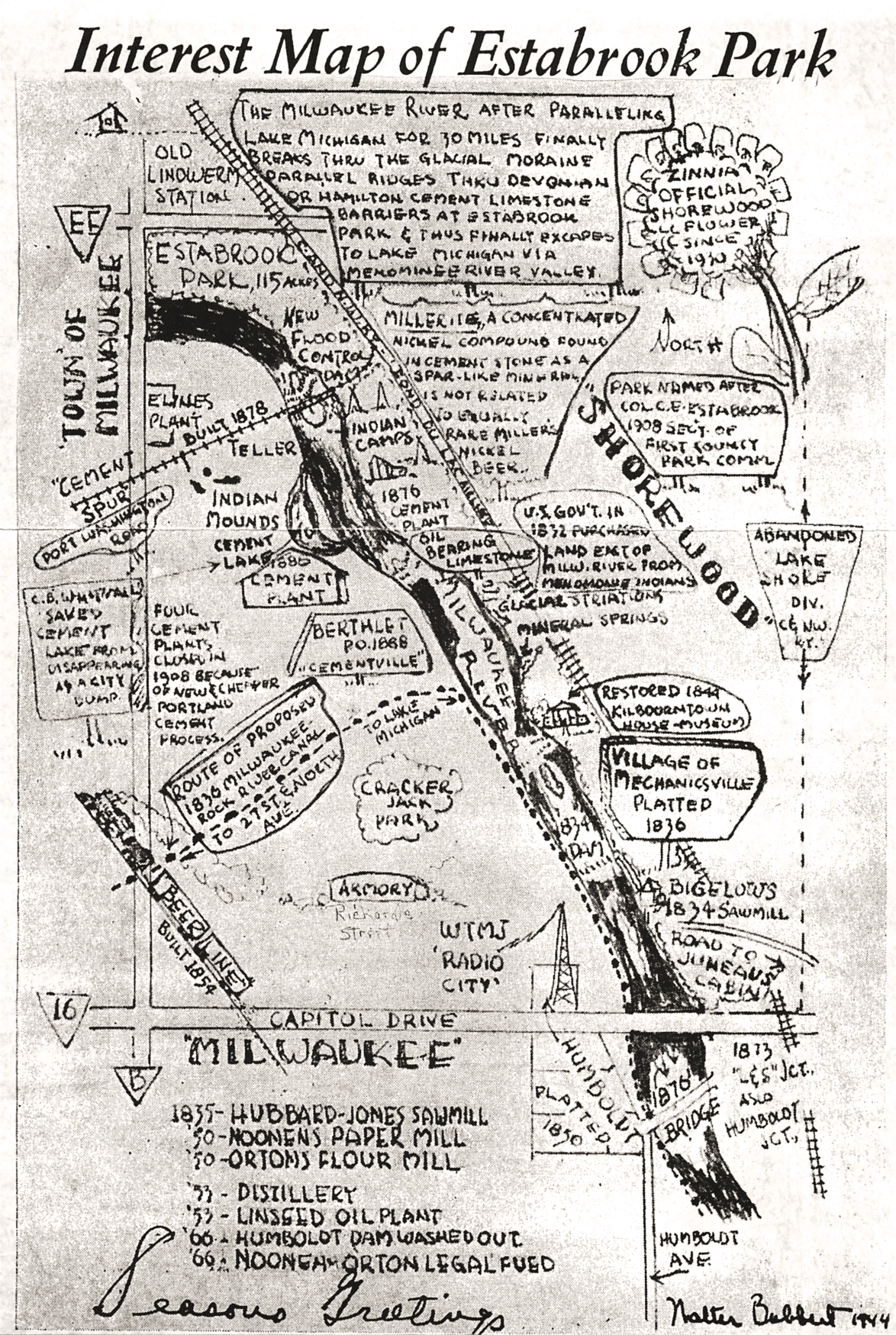 Notice that there are some Native American sites identified in the map, which also states that the land east of the Milwaukee River was purchased by the US Government in 1832 from the Menomonee Tribe.

As you come to Capitol Drive, you’ll be greeted with some interesting public art, which presumably changes periodically.

Continue to pass under the bridge until you reach a stairwell located to your left.

The stairs will take you up to Capitol Drive, where this sign is located:

2.Travel back safely through Estabrook Park using the lockdown road

Did you know that the most of the automobile road through Estabrook Park has been closed to traffic? Because of the lockdown, it is currently reserved for foot traffic, as well as bicycling and in-line skating.

This makes it an easy way to get back to Hampton Road. While the path isn’t as interesting as the Sauk Indian Trail, it is much easier to traverse.

Keep and eye out for wildlife in the Park, such as this deer spotted adjacent to TV6s transmission tower. 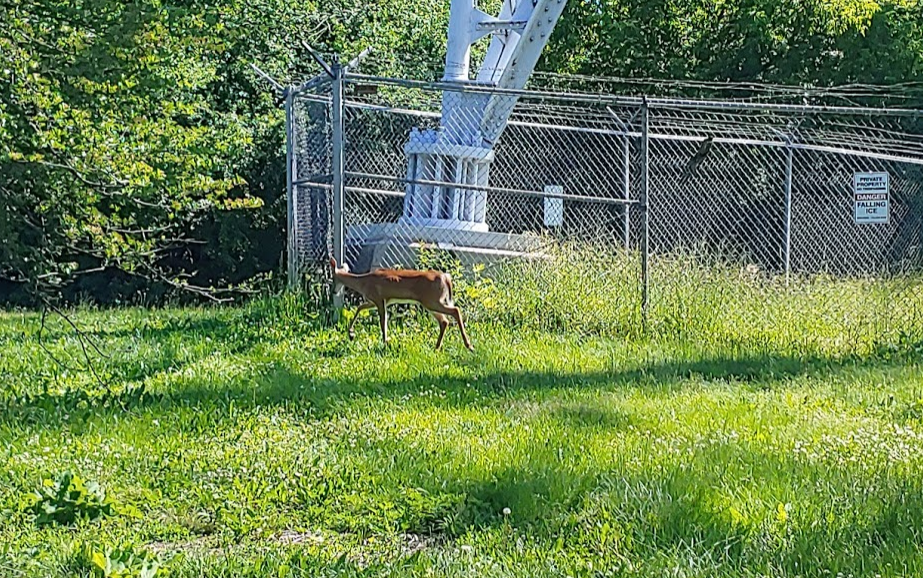 You’ll note that in addition to the road, there is a paved walkway that also runs the length of the park, so there is a lot of room to spread out.

There are also kid’s playgrounds and a dog exercise area along the way, so take your time and enjoy the trip back. 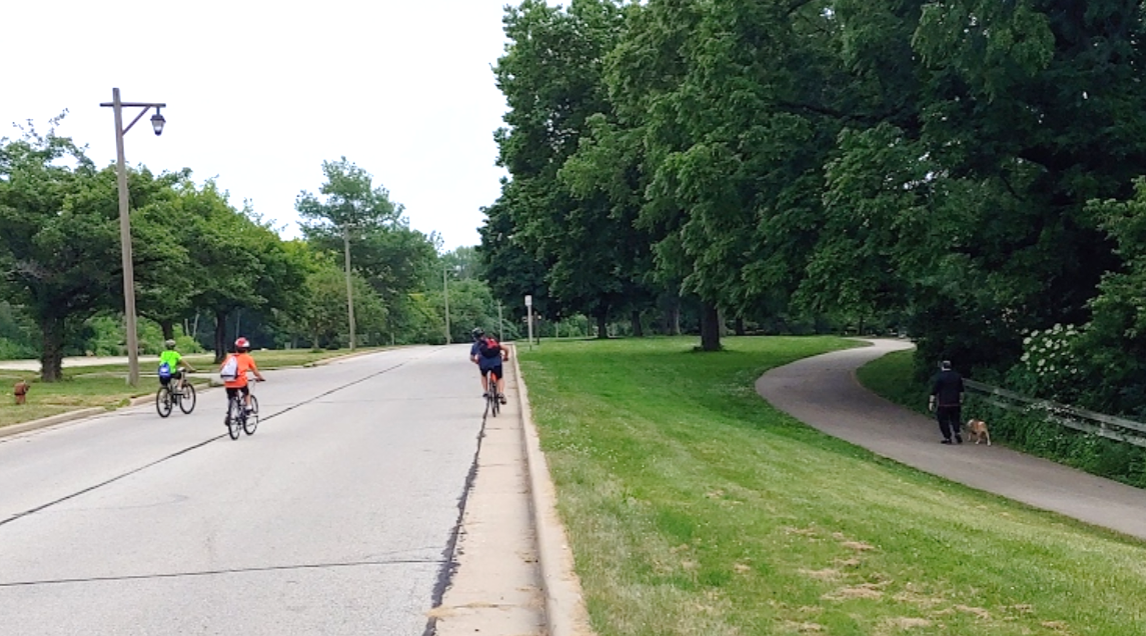