Things to Do Around Whitefish Bay: Part 3

The pandemic lock-down is getting old. We’re now six months into it. While some things are opening up, life is far from normal. And, for those of us older than a ‘certain age,’ even when places have opened an abundance of caution is likely to keep us from returning to normal pursuits.

As this ‘safer at home and OK outdoors’ environment continues, it can be helpful to find new things to do outside. Walking or otherwise traveling through the same routes is getting more than a bit boring. Therefore, this series of articles offers some recreational ideas that you might not have considered—things that you can do safely in Whitefish Bay and which might prove to be fun ways to enjoy the outdoors.

Of course, even though most of these pursuits are outdoor activities, a measure of social distancing is still in order if you encounter folks that are not within your safe ‘social circles.’

·Talk a Walking Tour of the Day Avenue Historic District, and Visit the Gnomes

The suggestions have all involved visiting local parks. This idea will get you into Village’s residential areas.

A few years ago, the Whitefish Bay historic preservation commission initiated an inventory of historic and architecturally interesting sites—its official name is the Whitefish Bay Architectural and History Inventory (WFB AHI, or the Inventory). A good deal of research has been done by the commission members, individual property owners, and professional building preservationists to develop the AHI. The Inventory now includes over 200 sites.

Most of these sites can be identified by a sidewalk medallion. 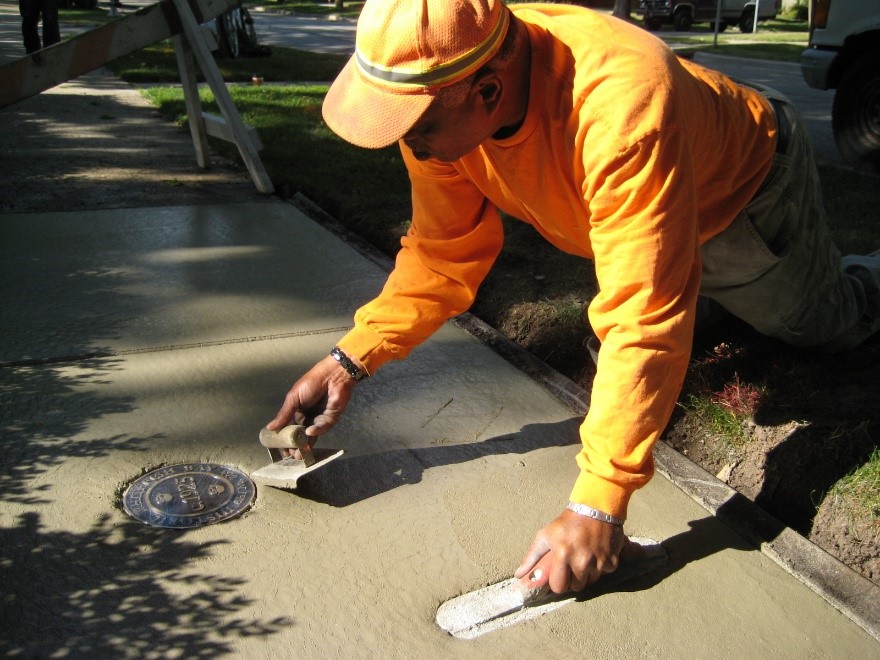 The highest concentration of these medallions is along Whitefish Bay’s historic East Day Avenue. This area was the Village’s first subdivision, and it has a lot of history to explore.

Many of the homes located in this neighborhood were described in an advertising brochure, entitled, “A Home on the Bay” which was distributed in 1892 and 1893 to interested parties, including visitors to the Pabst Whitefish Bay Inn.

It is believed to be the first subdivision developed in a rural area of Wisconsin, the creation of which was an important step toward the formation of the Village. Prior to this subdivision, the area was rural with a sprinkling of farmhouses, a few resort-themed bars along with the Pabst Whitefish Bay Resort (which had just opened) and a general store.

Before you begin your tour, try to place yourself back into the early 1890s.

As noted in the above advertisement, the new subdivision was “provided with water, gas and sewerage.” Electricity was not yet available in the area. Windmills provided water to the residents—it is believed that homes all had water tanks in the top levels. Natural gas was not yet available, so the gas must have been manufactured from coal. It is interesting to speculate where such a facility was installed and what it may have consisted of. Finally, it is unlikely that a waste treatment facility was in use—any sewers likely emptied out into the nearby lake.

But those were the days! Given the relative isolation of this subdivision from almost anything else, it must have been an interesting place to live. The owners likely worked in the city and used the Milwaukee and Whitefish Bay Railway (the so-called ‘Dummy Line’) to commute to work. The Milwaukee, Lakeshore and Western Railway also passed nearby. With the exception of the occasional sounds of the locomotives, the area must have been incredibly quiet and relatively pristine. The stars in the night sky must have been sharply defined, since there was little light pollution.

The owners likely had horses, buggies and associated carriage houses and perhaps horse-drawn sleds for the winter months.

The children would have attended classes at Lewis Scheife’s grocery store on East Silver Spring, until the Whitefish Bay schoolhouse was opened in 1893 in what is now Schoolhouse Park.

There are a few additional things you may wish to know about the architecture of many of the original homes in this neighborhood. 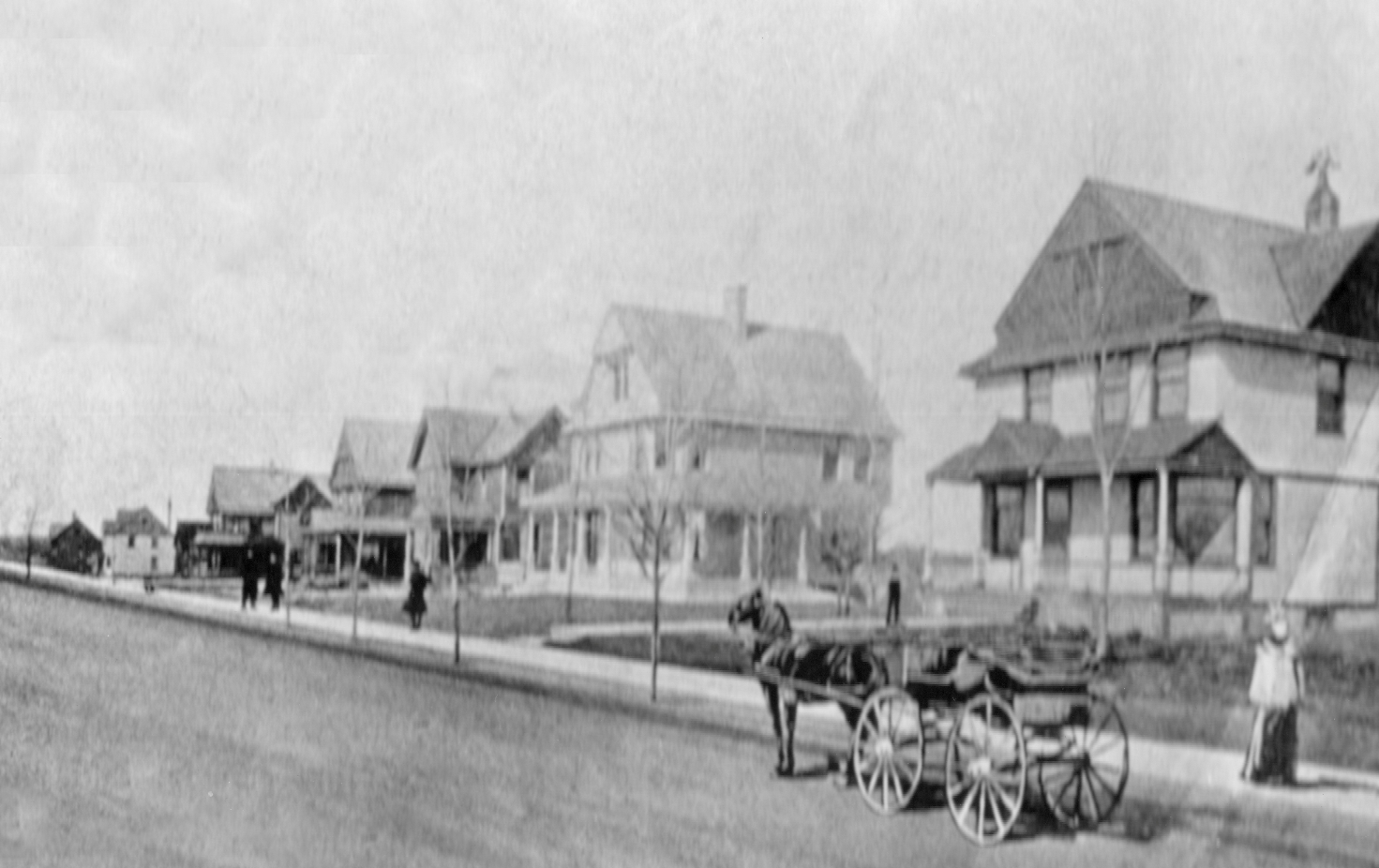 This photograph was taken in the early 1890s.

The following map provides the suggested tour route. Important homes are designated ‘A’ through ‘S’ from west to east, although you may wish to walk and observe one side of the street first, and then return on the other side. Note, there is no ‘O,’ apparently because of the sometimes confusion between ‘O’ and ‘0.’

Please respect the privacy of the owners, as you take the tour. Stay on the public sidewalks and alleys.

Additional Listing Details: This building, constructed in 1896, was listed in W. H. Goodall's name on the 1896 assessment rolls. Used as a clubhouse, the wheelmen (bicyclists) met there. It is reported that there was a bowling alley in the basement.

Additional Listing Details: Built in 1896. Some of the detailing has been removed from the house and the original siding replaced. However, the home continues to retain its original shape and Victorian features, including a substantial porch along the front of the residence.

Additional Listing Details: Built in 1893 or 1894 for Robert McAllister. The house recently underwent an extensive remodeling, including an addition to the east of the residence. The house's Victorian roots have been carefully preserved.

Status: Individually Eligible for Listing in the National Register of Historic Places
Local No.: 127

Additional Listing Details: Built in 1892 or 1893 for L. L. Disbro and his family. The next owners were Otto and Louise (Steffen) Voeks. Otto Voek was the area's coal dealer. The house was extensively remodeled in 2009/10. While retaining its Victorian roots, it now possesses some external features not present on the original residence.

Additional Listing Details: This residence was originally owned by Clarence and Cora Powers. It was later sold to Carl Steffen, who died here in 1897. His widow lived here until her death in 1903. The house was left to their 7 children - their son Albert F and family then lived in the home. The house was featured on a Tour of Historic WFB.

Additional Listing Details: This Williamsburg-style Colonial house was designed by noted architect Cornelius Leenhouts of the firm of Leenhouts and Guthrie. A harmonious addition was added in 1987. The residence includes a library in half-timber style, and generous use of crown moldings. It has an attached two car garage, which was unusual for homes dating from the 1920s. The house was built for Frank Baker, who served as the president of the Wisconsin State Teachers College at Milwaukee for twenty-two years, beginning in 1924. He led the Milwaukee State Teachers College into national prominence. Under Baker’s tenure, high admission standards and a limited enrollment helped maintain excellence. The Teachers College is now the University of Wisconsin-Milwaukee.

Additional Listing Details: Abraham Cressy Morrison was born at Wrentham, Mass. in 1865, and left school at 13 to earn money. While in his twenties he moved to Milwaukee to accept responsibility for publicity for the Pabst Brewing Co. While in Milwaukee he had this cottage built as a summer residence. He also became active in the Milwaukee ‘Wheelmen’ (bicyclists) and organized their events, many of which featured trips from Milwaukee to the Pabst WFB Resort. He left Milwaukee in 1897 and worked for the National Wholesale Druggists Association. Beginning in 1924 he offered prizes through the New York Academy of Sciences, of which he was president in 1938. The A. Cressy Morrison awards were given for papers on solar and stellar energy. He was the author of "Man in a Chemical World," "Encyclopedia of Superstition" and other books, including an article on the history of Milwaukee.

Status: Individually Eligible for Listing in the National Register of Historic Places
Local No.: 19

Additional Listing Details: This home was featured in a 1892-93 brochure that advertised the Day Avenue subdivision. Alonzo Fowle was a prominent publisher, with a business located in the City of Milwaukee. He, along with his partners King and McGee, were among the first 'commuters' living in the Village. This home later was owned by the Hayes family. Mr. Hayes was an executive of the Milwaukee Electric Railway and Light Co. (TMER&LCo) and took the streetcar to work every day. Later his son, Harry Hayes, became a prominent Village attorney. 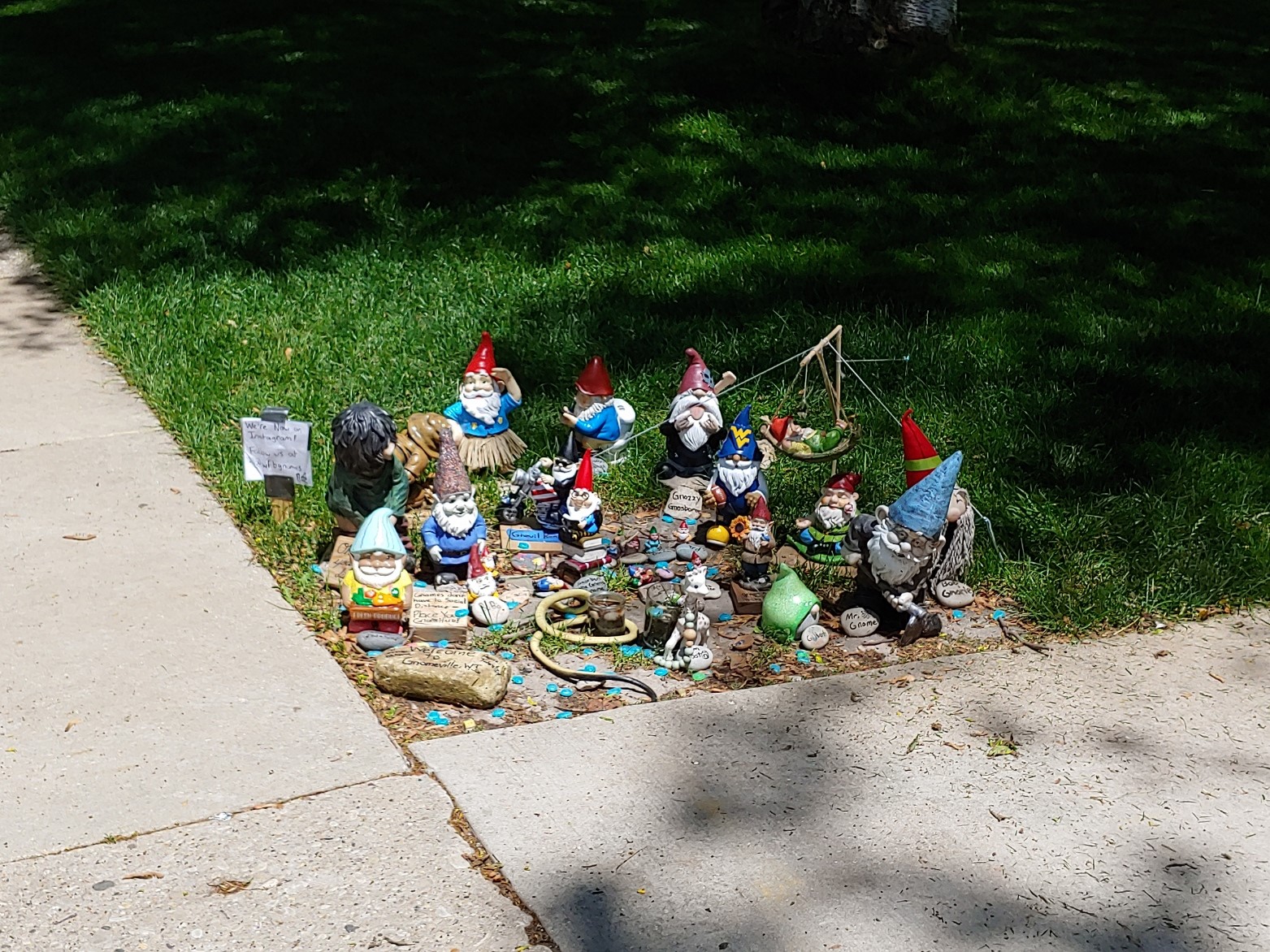 At the corner of East Day Avenue and North Shore Drive you may observe this Gnome village. The Gnome Village has its own Instagram site: wfbgnomes, welcome to Gnomeville, USA, home of @wfbgnomes. Feel free to take pictures!

Additional Listing Details: This house was determined to be an exemplary local example of a residence designed in the Colonial Revival style of architecture. It was identified in 2011 during an Architectural and Historical Intensive Survey, and determined to be immediately eligible for listing in the National Register of Historic Places

Additional Listing Details: Mrs. Marie Gether and her daughter Adolpha originally lived in this house. She was the mother of C. Robert Gether, who lived at 726 E. Day. This home was featured in 1892/93 Day Ave sales brochure and originally had a wrap-around porch. The house was extensively remodeled after a November 1924 fire and converted from a Victorian styled residence to a Tudor-Revival style.

Status: Individually Eligible for Listing in the National Register of Historic Places

Additional Listing Details: This residence, built in the Queen Anne Style, was built in 1892. Three dormers were added to the attic in 1978; article and photos included in Milwaukee Journal article. A deck added in 1991. This house was featured in 1892-93 Day Ave Sales Brochure - had an extensive wrap-around porch at that time.

Additional Listing Details: This residence was built in 1892 for C. Robert Gether. Gether was instrumental in the development of the Day Avenue subdivision and in getting the WFB railway to extend its track north to Day Avenue. Extensive remodeling was done after a January 1923 fire, including the addition of an attached garage and east. Originally had a third floor. Remodeled in May 1923, with the inclusion of an addition. As a result, the house has lost much of its original Victorian-style design.

Additional Listing Details: Built in January 1896 for James J. Perkins. He also owned the lots to the east of the residence, as far as the bluff to Lake Michigan. In 1905 he sold the residence to Dr. Henry Schmidt, who had a psychiatric practice in Whitefish Bay. An addition, including an enclosed garage, has been added to the west of the residence in later years.

Additional Listing Details: Amazingly, this residence started out as a rather modest cottage. Several articles in the WFB historical files refer to an unused Gregg cottage being put to use for gatherings and that the cottage was located on Day Avenue. The Gregg house itself was located on Lake View Avenue. Numerous changes have subsequently been made to the house.

Additional Listing Details: This house was determined to be an exemplary local example of a residence designed in the Tudor Revival style of architecture. The garage is joined with the adjacent home, which is designed in similar style. This home was identified in 2011 during an Architectural and Historical Intensive Survey. Site determined to be immediately eligible for listing in the National Register of Historic Places

Additional Listing Details: This house was determined to be an exemplary local example of a residence designed in the Tudor Revival style of architecture. The garage is joined with the adjacent home, which is designed in similar style. This home was identified in 2011 during an Architectural and Historical Intensive Survey. Site determined to be immediately eligible for listing in the National Register of Historic Places

At least one building that existed on the street has been raised, perhaps because of its proximity to the lake bluff. It housed a sanitarium built for Dr. Schmidt and his patients. It opened in April 1909.

The Youth Services Department has gathered together a collection of educational books to help support our families and students. This new collection is currently on display in our department. It includes books covering a wide range of needs from homeschooling and alternative-schooling strategies, reading and writing guides, educational philosophies, emotional/social learning, study skills and time management and much more. Here are some highlights from our new collection!