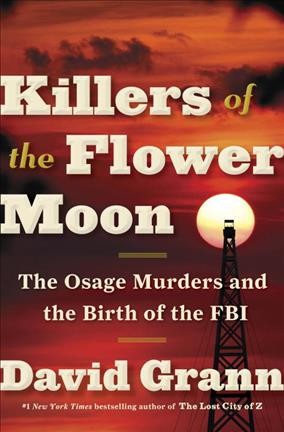 Our Mystery Book Club meets once a month and is led by librarian Sharon Nagel. This month we're reading Killers of the Flower Moon by David Grann.

This meeting will take place virtually on Zoom. Click here to join:

1920s Oklahoma. The richest people per capita in the world were members of the Osage Indian nation in Oklahoma after oil was discovered beneath their land. Then, one by one, the Osage began to be killed off. The family of an Osage woman, Mollie Burkhart, became a prime target. Her relatives were shot and poisoned. Many of those who dared to investigate the killings were themselves murdered. It became the FBI's first major homicide investigation... and the bureau badly bungled the case. J. Edgar Hoover turned to a former Texas Ranger named Tom White, who put together an undercover team which began to expose one of the most chilling conspiracies in American history.

Our Mystery Book Club meets once a month and is led by librarian Sharon Nagel. This month we're reading Murder at the Mena House. Also we have a special guest this week as author Erica Ruth Neubauer will join us for our discussion.

END_OF_DOCUMENT_TOKEN_TO_BE_REPLACED

Our Mystery Book Club meets once a month and is led by librarian Sharon Nagel. This month we're reading No. 1 Ladies' Detective Agency by Alexander McCall Smith.

END_OF_DOCUMENT_TOKEN_TO_BE_REPLACED
Back to Calendar View