Recently there has been a Facebook trend going around asking you to post your seven favorite books without comment. As an aspiring librarian I thought it would be a better idea to encourage others to post their favorite books and why. So here are seven books that have helped me on my path to becoming a librarian.

If you give a mouse a cookie: Due to some hearing issues I had trouble reading when I was younger. My grade school allowed parents & grandparents to come in and read to their children. I always remember my grandmother coming in and reading this book to me.

Where the Red Fern Grows: This is the only book that I’ve never finished! Due to the hearing and reading issues I had when I was a child my mother used to read to me before bed. (Spoiler alert!) For those of you that have read the novel you’re aware what happens towards the end. When the dogs died I couldn’t finish the book. It was maybe two chapters. I have never read those two chapters.

Harry Potter Series: Harry Potter was released when I was in middle school so I was devouring the books as any kid was. I remember my mother taking me to midnight releases and driving home with the dome light on in the car just so I could read. The next morning she would wake up and come ask me if I had stayed up all night reading and sure enough I did. For every book my mother and I went to the midnight release of each Harry Potter book. 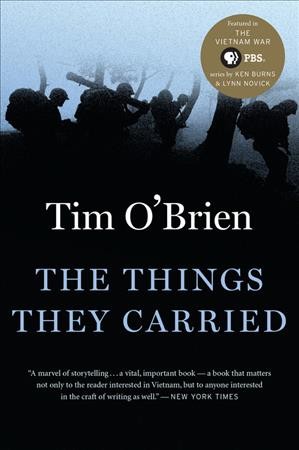 The Things They Carried:  After Harry Potter was finished I was in a slump, I had no idea what to read or what I liked. In my high school English course we had to read O’Brian’s novel and it brought me back into the fold. It was one of the books required of me to read that I enjoyed. Not only did I like it but it also helped me branch out past youth and young adult books.

Interview with a Vampire: My best friend during high school had already read Anne Rice’s collection of Interview with a Vampire, The Vampire Lestat, and Queen of the Damned. After breezing through the Things They Carried I was looking for something else to devour and she suggested the collection.  Of course this started my love affair with vampires and my admiration of Anne Rice’s writing style.

Voices from Chernobyl: This is the book that started it all. I had to read this book in my undergrad for a world literature course.  The book takes interviews from people who lived around the area of Chernobyl and knew victims of the nuclear incident. While it is somber the book was an eye opening experience between two passions of mine, literature and history.  Aleksievich’s novel made me look into becoming an archivist and a librarian. This led me to apply to UWM and join their library and information science program.

If you’re on facebook I encourage you to tell your friends about this post. Share your favorite reads with your friends and family, embolden them to give some a try.  Even if they don’t read them sometimes it’s just fun to think about the memories associated with books!